quote
Cyclone Studios was formed in 1994 with a mission to create mind-blowingly different and groundbreaking video games. Since that time, Cyclone Studios has grown from a two man "garage operation" to a 40-person development shop comprised of some of the freshest young talent in the business.
We are Cyclone Studios, a division of the 3DO Company. Our offices are located in exotic San Mateo, California. We are currently developing products for the PC and PlayStation including Uprising™, Requiem Wrath of the Fallen™, Third Domain™, and BattleSport™ II. In an industry that is going more and more corporate, we haven't forgotten that gameplay is king. Thanks for visiting our site, and we sincerely hope you enjoy our products when they come out.

James
...but I then moved on to working with ah cyclone Studios, actually saw "ands?" the developers, at "lower?" and had sort of, created a sort of a spin-off group that we put together using a Net Yaroze box that we pitched to Sony in London in 97.
Um, I don't know if you remember that but that was the, sort of, five hundred dollar, [sort of developer friendly].
Interviewer
Black PlayStation one.
James
Yep, for PlayStation one.
Interviewer
For developers.
James
Exactly, which again, it's like people seem to forget that, at the time those development kits would cost anywhere from like thirty to fifty thousand dollars just to get a single developer kit and so the Net Yaroze really, was a, an approach that was um, I thought it was fantastic, right, for the cost of effectively about five or six hundred dollars, you got almost a development eh, a full development kit which was one step away from, being a full-on dev board but enough to actually, (you know) put a game together and we actually, you know, put a playable game that we pitched to Sony in London and (you know and) that side worked out.
Unfortunately the team, you know, the wheels of game development takes, you know, moves slowly and so that developer ended up taking a contract job and I returned back to the United States to work out at, cyclone studios which then got bought by 3DO, so I helped design the army men air attack game...

Images from archive.org page of 3do.com 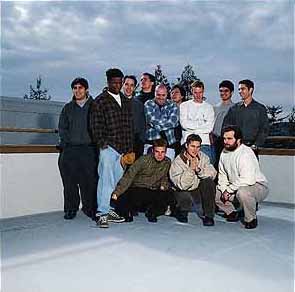 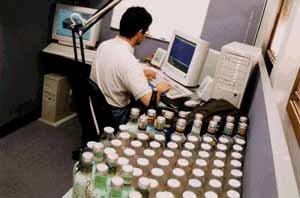 "Screw you," says the Director. Get it? He's holding a screwdriver. (Groan.) 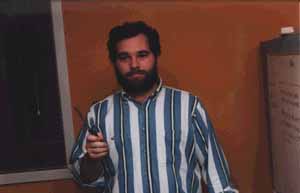 Cyclone Studios' employees are known for their incredible work ethic, as demonstrated by the creator of Uprising's TerraTech engine. 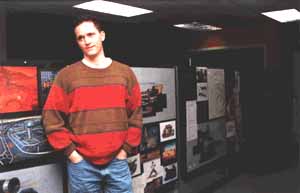 The note taped to the back of the chair reads: "I cannot hear you or see you. I'm working toward a crucial deadline. Go away. Have a nice day." Level designers are weird. 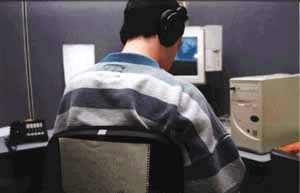 Your name or alias (required):


Your entered name and comment will be displayed above this form.
There is no reply notifications or editing of comments.
Spam, swearing or off topic comments will be removed.